The South Metro Advisory Committee with continue to meet virtually until further notice. Zoom meeting details will be sent via registration confirmation email immediately upon registering. 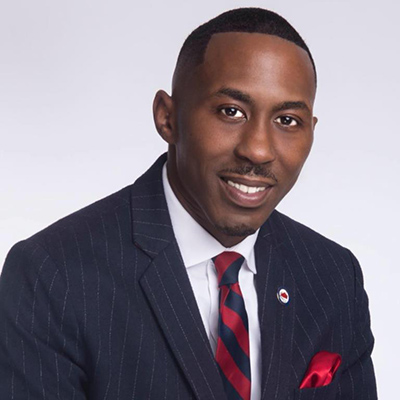 Ricky L. Clark, Jr. was appointed by the Mayor and City Council as City Manager to ensure the efficient day-to-day operations of the City. His current responsibilities include working closely with municipal departments and staff to ensure that policies and procedures are performed efficiently and economically, preparing the annual budget, promoting a positive image of the City, coordinating community relations and presenting his office as one with an "open door" attitude to the citizens and visitors of the City.

A native of Griffin, Georgia, Ricky is no stranger to executive level governmental management. Ricky has worked in government since the age of 18. Ricky has served as Assistant to the County Manager of Spalding County, County Clerk & similar roles in Union City. Only a few years into his tenure with the City of Jonesboro, Ricky has made his mark! During this tenure, Ricky has completely redesigned the City's website, created branding/marketing collateral for the City, overhauled old codes, policies and procedures to ensure efficient operations and has been the planner of the great events in which you are seeing around the City of Jonesboro. In addition, Ricky kicked off quarterly business breakfast in which all business owners within the City of Jonesboro are educated on the community, services and other relevant matters to ensure the growth of businesses. Ricky's grant submittal to the Atlanta Regional Commission, resulted in an $80,000 Major Study to revitalize the central business district of Jonesboro. Ricky is also the Executive Director of the Jonesboro Downtown Development Authority & the Main Street Advisory Board.

Ricky is a proud member of the Lake Spivey Rotary Club, National Forum of Black Public Administrators, Georgia's Downtown Development Authority, International City/County Management Association, Georgia Local Government Personnel Association, Georgia Association of Business Tax Officials, House of Dawn Board of Directors & the Mosamo College Preparatory Academy Founding Board. Ricky also serves on various other committees & authorities. Ricky is the Minister of Music at the Faith United Methodist Church in Griffin, Georgia where he has served for many years. Ricky is also a Board Member for the Atlanta Airport Chamber.

Throughout his career, Ricky has received several prestigious awards. Most recently, Ricky was awarded the 40 under 40 award from the Atlanta Business Chronicle which highlights those under the age of 40 that have made significant career achievements and have demonstrated social responsibility. Additionally, Clark has served as the Vice President of the Georgia County Clerks Association.

Please contact the City Manager if I can ever be of any assistance to you.
Event Sponsors:
Location:
Online via Zoom Video Conference
Zoom meeting details will be sent to all registrants via confirmation email immediately upon completing your registration.
Date/Time Information:
Third Tuesday of Every Month
12:00 - 1:00 p.m.
Contact Information:
Joseph Santoro
Send an Email
Fees/Admission:
Free to Council Members, Elected Officials and staff
Set a Reminder:
Business Directory News Releases Events Calendar Hot Deals Member To Member Deals Marketspace Job Postings Contact Us Information & Brochures Weather Join the Council